The weather can’t seem to make up it’s mind lately.  One day it is 63 degrees and people are wearing shorts and t shirts.  The next day it is 30 degrees, windy and people are back in winter jackets and gloves.  I don’t usually complain about the weather  because it is going to be what it is going to be.  This, however, is getting ridiculous. It needs to hit 70 degrees and stay 70 degrees.

The only good thing about the cooler weather is I don’t have to justify making soup.  I love soup.  I have a big file of soup recipes that I make all year round.  Apparently, eating soup in the summer is weird, at least according to the people I have in my life.  I maintain that soup in the summer is fine because we don’t just eat cold things in the summer.

Anyway,  I saved my ham bone from the ham I made a few weeks ago. I didn’t really know what I was going to do with it but soup sounded like a good idea.  I like the kale in this soup because it stays really crisp and fresh tasting even after several days in the fridge and through reheating. 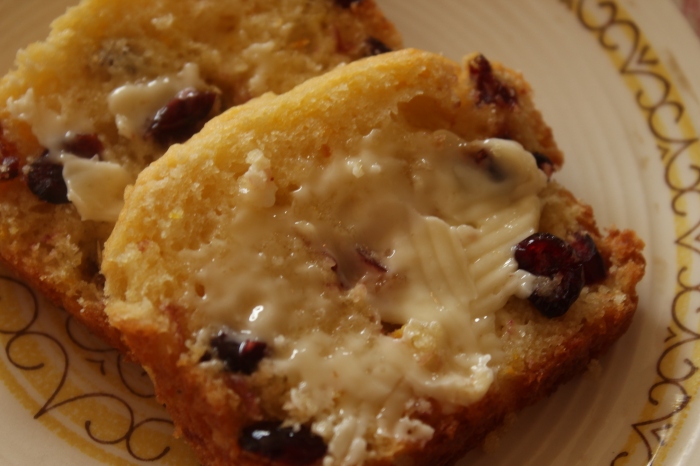 I was going to post this recipe on Sunday as a celebration of being on vacation for the next nine days but all I have done for the first 2 days of my vacation is sleep.  Don’t feel bad for me,  I don’t sleep well most nights so if I sleep all day it is because I need it.  Also don’t feel bad for me because I still have 7 days of vacation left.

Preheat the oven to 350 degrees. Spray a 5 x 2 inch loaf pan with non stick cooking spray.  In a small bowl, combine flour, sugar, baking powder, and salt.  Mix well.  In an other small bowl, combine the milk, orange juice, cooled butter, oil, orange zest, cranberries and nuts, if using.  Combine the wet ingredients  with the dry ingredients. Stir to combine until just moistened. Scrape batter into the prepared pan.  Bake for 30 -40 minutes or until a toothpick inserted in the center comes out clean.

I used to laugh at the people I knew who made their own salad dressings.  It seemed like such a ridiculous thing to do when a person has so many to choose from right from the grocery store shelf.  Then I joined Weight Watchers and started reading labels very carefully. It was then I realized most salad dressings are very high in sugar, fat and many other things I can’t pronounce.  If I can’t pronounce it, it probably isn’t very good for me. It seemed to me I was undoing all the good things I was trying to do for my body with Weight Watchers by using these products. I began making my own salad dressings and I haven’t looked back since.

My second recipe every beginning cook should know is the basic vinaigrette.

The basic recipe for a vinaigrette is 3 parts oil to  2 parts vinegar the rest of the ingredients are up to you.  I have included 3 recipes for vinaigrette to show you how infinitely variable they are.  I think once you try them you will find them better then anything you can buy.

salt and pepper, to taste

Whisk together the first 6 ingredients.  Add salt and pepper to taste.  Drizzle over salad greens

Put salt, mustard and vinegar in a small jar and shake it to dissolve the salt. Pour in the oil and shake throughly again. Taste and adjust the seasonings to your liking.  Drizzle over your salad greens.

Combine everything in a small bowl. Whisk until blended.  Shake well before serving.

Okay, it isn’t a new computer. It’s a new to me computer.  My dear friend, Steph, has lent me one of her old laptops until I can save up enough money to get exactly what I want for a new computer.  I am soooo excited I don’t have to wait to get to the library to type up my posts any more.  I can only only spend so much time at the library on my day off and if stuff comes up, I don’t get there after work during  the week.  Now I can go back to writing my posts in my pj’s while lying in bed while watching episodes of Chopped. LOL!!!!!!  So starting Friday  I will be back to my regular schedule of posts on Monday, Wednesday and Friday.  See you all then.

One of the things I like about my current job is the totally random conversations I get to have with customers while I am helping them. Yesterday I had  a random conversation with a fellow Dr. Who fan about how Christopher Eccelston is a totally underrated Doctor.

However, my most favorite random conversations generally revolve around food and cooking.  I was talking to  a customer about my blog and being a food blogger when she looked down at her cart of frozen dinners and jarred pasta sauces and said “You must think I am absolutely horrible.  I know I should cook from scratch with real food. I just don’t know where to start. It’s all so overwhelming.  If you were me where would you start?”

I assured her I didn’t think she was horrible.  I used to cook the exact same way.  As for the rest of the question I told her I would give it some serious thought because I had never thought of it before. I would give her an answer the next time she was in the store.

So after some serious thought I came up with 10 recipes that I think every beginning cook should know.  The recipes either are some thing people think takes a lot of time to cook from scratch but doesn’t or looks complicated to make but isn’t.

The first recipe I think every cook should know how to make is macaroni and cheese . It is one of those recipes that people think takes forever to make from scratch but really doesn’t. In fact, making homemade mac and cheese takes about the same time to make as a box of mac and cheese but tastes much better. I like simple things so I only use cheddar cheese in this recipe. I always have cheddar cheese on hand.  You could use any cheese or combination of cheese you like.

You could also add any spices, herbs or meats you wanted to to fancy it up a bit  but, like I said, I like things simple.

Prepare the macaroni according to the package directions. Keep warm.  Melt the butter in a medium saucepan over medium low heat; whisk in flour until smooth.  Cook, whisking for 2 minutes.  Gradually whisk in the milk and cook , whisking constantly, for 5 minutes or until thickened. Add the cheese mixture to the macaroni as well as the salt and pepper; mix well.